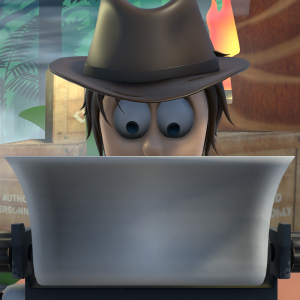 We’ve had a blast releasing AweVenture to help people create customized scavenger hunt adventures in seconds, but now we’re excited about something else: building a better adventure.

When my youngest son, Evan, was 9, he was really struggling. He was having a hard time making friends and that was bleeding into other areas of his life. He was wondering what made him valuable and important. He wanted to know why he mattered.

So I decided to make his 9th birthday party something special. My sisters and their families lived far away and couldn’t attend, so I had them dress up as super hero and super villains. They created videos to steer Evan toward the different locations where rubber ducks were hidden (he was obsessed with rubber ducks at the time). Every time he found a duck it had a barcode that he could scan that would start the next video.

The day started with a delivery of Superman shirts with the letters of each person at the party, and a special note. It ended after we went on our scavenger hunt all over town for treats, presents, go kart rides, and more. That was the day the idea for AweVenture was born, the day that set us in motion for building a better adventure, but the end result was a lot different than I expected.

When we released AweVenture exactly three months ago today, we were unprepared for what would happen next. We wanted to create an easy way for parents to throw together a memorable experience or make some fun group games for kids. We had a lot of interest before the app was even released and saw a large number of downloads after it made it to the app store.

We then released an update with a competitive mode for team building games, get-togethers, fun team games, and other events so all ages could enjoy the app. Since launch we have added four new adventures.

But what really surprised us was the demand for more. We had built the app in iOS to start. Within a few days we noticed a large portion of our requests were for an Android version. It was something in the plans, but we had no idea how big a request this would be with a brand new product.

And so, after we started to see other things we didn’t anticipate, we decided to start building a better adventure, and it started with a simple call to a company three hours away.

It’s All About Focus

As with any new business, you go with your best plan and change as needed. We saw the need for exciting events, team building games, and unique party experiences and moved forward. We planned out our update schedule for the year and were surprised to find what we thought was most important was different from what others saw as most important.

So we contacted Drive Research, a market research firm out of Syracuse, New York to put together some focus groups. We wanted to speak first hand with people that would use the app to understand their thoughts and impressions so we could better meet the needs of our customers.

The focus groups Drive Research put together were amazing! They had so many strong insights and the research team knew just the right questions to ask to uncover some really meaningful discussions. We had a blast interacting with and talking with several people and getting to know their feelings about the app. What we found was both encouraging and challenging.

We were encouraged to know that, like we thought, people were excited about the app, loved the idea, and could see how it met a need, making scavenger hunts almost painless to setup and run. Likewise we heard some ways that we could greatly improve the app to make it clearer,  with more transparent pricing, and a few ways to take it to the next level.

In short, we heard a lot of ways we can take a valuable product and make it even better. We have already drafted plans and a roadmap that include immediate changes that we’ve already taken including pricing changes and a free first adventure, changes that we will roll out soon, including making it clearer what each adventure entails, and changes that are scheduled to roll out after our Android release that we are super excited about and can’t wait until we can share them.

We’re excited both about what’s happening with AweVenture today and about what the future holds. We’ve heard some great insights and developed some exciting plans. We’re building a better adventure, and we’re looking to make it even more exciting to find where your adventure will take you.